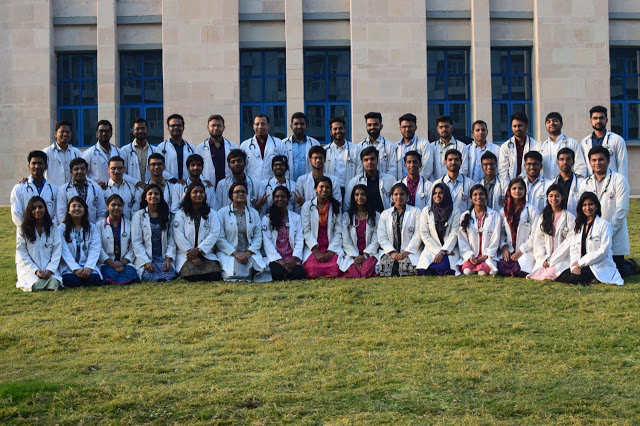 I have always wondered why we are learning quintals of information at medical colleges, if we aren’t going to apply even half of it to our clinical practice. Despite getting into pediatrics course for my post-graduation, I still can’t understand why nephrotic syndrome is taught so extensively for the undergraduates but not how to give proper dietary advice to a child who is undernourished. When the undergraduates are asked some trivial and common doubts related to pediatrics, they are perplexed that they don’t know.  Medical students may not make a mistake even if they are called up from their sleep and asked about the enzyme deficiency in Phenylketonuria but they don’t have any idea about the first line antibiotic for an acute invasive diarrhea which is very common in a tropical country like India. The academic system that exists right now in our country fails there. Our academic system is so redundant that it actually promotes rote learning, consequently developing some book worms instead of doctors at the end of 6 years. A certain amount of emphasis on the important topics related to the commonly encountered medical problems needs to be given.
In order to help the undergraduates, I will enlist few areas of pediatrics, where they can concentrate during their final year of studies or during their internship which will help them in contributing something for their locality.

A lot of propaganda is going on now in the society about vaccination, despite having enough testimonials for the efficacy and safety of vaccines. In this era of social media, people with vested interest can quite easily spread fake news about vaccine related complications and unknowingly, our uncles and aunties share the same via messaging platforms like WhatsApp. I      have seen tens of children who haven’t been given a single vaccine, courtesy to the deep-rooted belief running in their community against vaccines. The fake news makers know where to target as well. For example, one fake news was that, there is some extract obtained from pigs which is used to make MR vaccine. This news will definitely cause panic among Muslim community. Even in states like Kerala, which boasts of 96% literacy rate, children died due to Diphtheria couple of years back. On the top of it, there are some religious leaders who talk tonnes and tonnes of crap against vaccines. Medical students from these communities can play a vital role in alleviating these myths so as to maintain adequate immunization coverage. They can also explain scientifically about the adverse events following immunization to the parents, if the parents feel apprehensive about any side effects of immunization. If they want to go one step further, they can even advise the parents about the optional vaccines      available like influenza for those kids who are at risk (kids with kidney disease, heart disease or on immunosuppression).

There is no need to emphasize the importance of nutrition in children. Unlike popular perception, malnutrition is not uncommon in affluent families. Out of the odd 12 severe acute malnutrition cases that I have seen in the past 2 years, only one was due to poverty (that mother actually had no breast milk to feed the baby and had no financial assistance to buy a formula feed).  From my personal experience, the reason behind a major chunk of severe acute malnutrition cases are wrong feeding practices like not initiating complementary feeding, giving diluted milk etc. One of the severely malnourished was actually from a doctor couple family. There are enough evidences from literature to suggest that the nutritional status at childhood determines physical as well as mental well-being at adulthood.  Even with basic understanding in pediatrics, an undergraduate medical student can identify the lacunae for improvement in the nutrition given to a particular child. It is important to tell all caretakers that, we should introduce all five food items to the child, within one year of age itself (cereals, pulses, fruits, vegetables, and diary). A mere physical examination, along with anthropometry, is enough to identify the signs of deficiencies like stunting, wasting, rickets, scurvy, angular stomatitis etc. The best part is that, you can turn the course of development and well-being up-side-down, in a good way, by small interventions, as far as nutrition is concerned.

Breastfeeding is a natural process but nevertheless, in some cases, mothers and babies may need assistance. The ladies who have undergone caesarian may be reluctant to feed in the initial days and, consequently, they may resort to formula feed which is a less beneficial option for the baby.  Also, timely initiation of complementary feed is also crucial as the calorie requirement of the baby can’t be met by breastfeeding alone after 6 months. I have seen mothers giving some local remedies like honey, apparently to increase immunity, after receiving advices from relatives, which can potentially cause osmotic diarrhea. Such myths are so deep-rooted that, even doctor’s advice is of no help. Notwithstanding the campaigns made by governments, 6 months exclusive breastfeeding is still not being practiced by a major chunk of population. In such circumstances; an undergraduate of the same family can burst such myths as they have better reputation in their family compared to any pediatrician.

The treatment of most of the pediatric ailments can be initiated by a primary health care provider. It includes management of diarrhea, dysentery, worm infestations, anemia, vitamin deficiencies and even respiratory infections. This can be lifesaving as well, especially in the cases of diarrhea where ORS and Zinc administration is all that is required in most of the cases. Moreover, government has published guidelines for the primary care providers for the management of the common diseases and their referral.

It’s a matter of fact that the mother knows her baby the best, but subtle delay in development may not be obvious to her. Recognizing delays at a very early stage is of paramount importance as far as prognosis is concerned. To explain the developmental delay, pediatricians classically quote social smile. A mother may not recognize the delay in social smile because the baby may produce an expression which is similar to smile, but that isn’t social smile. Social smile is the smile seen on baby’s face when he looks at the face of the caretaker, in the absence of tactile stimulation like tickle. This means that the smile elicited by shaking the baby or tickling the baby is not social smile. If social smile is absent even after crossing 3 months of age, it is pathological and it can be the first sign of disorders like autism. Such subtle milestones can be easily picked even by an undergraduate and this will help the mental status of the baby in the future.

Even the most educated people aren’t aware of most of the national programs, let alone the poor uneducated people. Introduction of new vaccines, implementation of new guidelines on nutrition, availability of facilities through new schemes etc. may not reach the needy if they aren’t aware of it. To quote an example, a lot of changes happened in the area of immunization in the past one decade. Switch to bivalent polio vaccine, introduction of Rota-virus vaccine, introduction of pneumococcal vaccine etc. are some of the examples. These changes won’t benefit our children if the parents as well as the local community are ignorant about it but an undergraduate can bridge that gap.As someone rightly said, for 7 out of 10 diseases, a primary health center doctor who has a good insight about common ailments will be good enough. So, I request all the undergraduates-would-be to please read about the topics enlisted above during your study period so that you can do something on your own for the kids of your locality rather than referring everyone to a higher center.