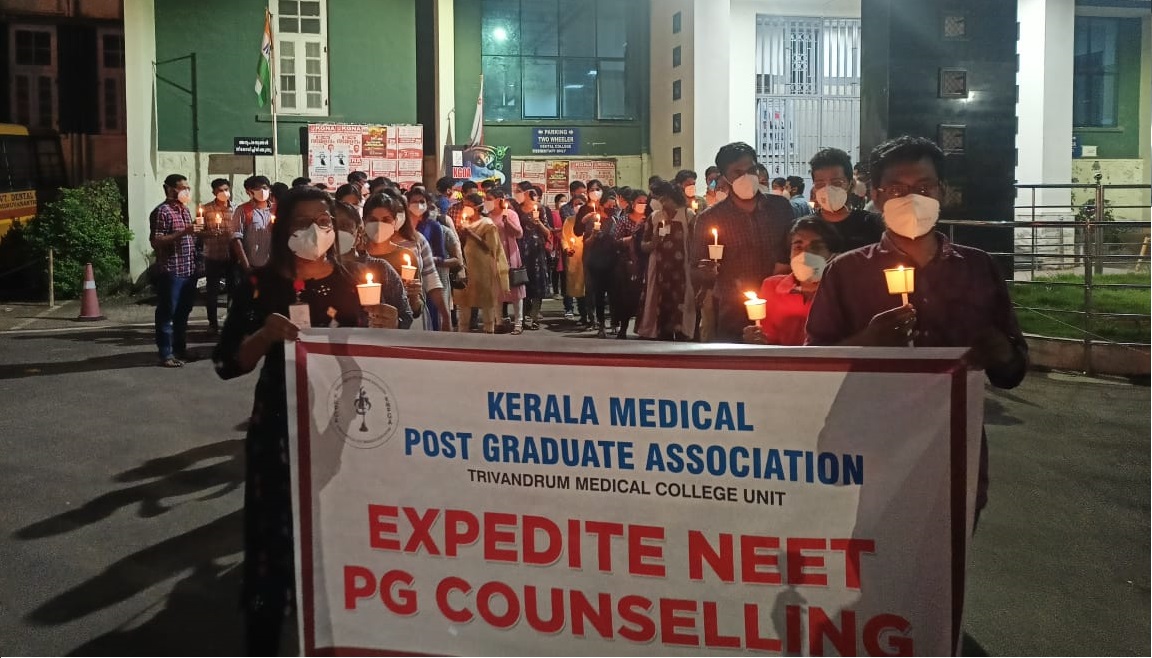 The PG doctors strike has entered its 12th day at the time of publishing this article and it has badly affected the patient care at the Government Medical Colleges (GMCs). If you feel that the resident doctors (PG doctors) are at fault for this mess, then please go through the whole article to completely understand the problem. This protest is nothing less than a movement that will benefit both doctors and patients.

The crux of the matter

In case you don’t know, post-graduation after MBBS consists of a three-year-long course in which the doctor needs to treat patients and study the subject simultaneously. At any given point in time, three batches of junior residents (PG doctors) will be present in the medical colleges. Admission to PG courses is through the NEET PG examination which is usually conducted in January and the admission process will get completed by May of the same year. Due to the COVID pandemic, the NEET PG entrance exam was conducted in September after a delay of 9 months, and the counseling process of the same is still facing a roadblock due to a court case concerning the reservation of Economically Weaker Sections (EWS). The case has been under the consideration of the Supreme Court since October and the next hearing is on January 6th, 2022. This has resulted in the deficiency of one-third of PG doctors in an already manpower deficient health system and this also means that all medical colleges across India are working with 66% of the actual workforce. The delays in admission to post-graduation courses also resulted in the washout of a year for the PG aspirants.

The second part of the problem is the herculean work schedule of resident doctors. The work schedule of resident doctors is one of the worst across all service sectors and most of the time, the schedule is so hectic that it goes against the basic rights of a human being. Junior residents are forced to take 36 to 72 hours long shifts multiple times a week and no one even talks about it. They are forced to skip their meals, let alone their household chores. As Government medical colleges are the only hope for a major section of the society who can’t afford the bills of corporate hospitals, the crowd at medical colleges is almost always unmanageable with the current strength of doctors. As the workforce is too low, PG doctors can’t skip their work even when they fall sick. A doctor attending to patients with an intravenous cannula fixed at her vein is not a rare sight at medical colleges. Pregnant and lactating PG doctors take tiring shifts when their counterparts in other service sectors take maternity benefits. Delay in the arrival of a fresh batch of PG doctors worsened the existing human resource crisis.

When the resident doctors realized that the counseling process of the NEET would not happen shortly, they started protesting all over India and Kerala medical postgraduates also joined the strike under the banner of the Kerala Medical Post Graduates Association (KMPGA). KMPGA put forward the following demands in front of the state government:

2. Reinstatement of 4% annual hike in the stipend of JRs.

3. To write a letter via a proper channel to the central government to expedite the process of NEET PG counseling.

It must be remembered that the KMPGA had already met the Health Minister of Kerala, Mrs. Veena George, once in August to discuss the first two issues (NAJRs and stipend hike) and then Minister gave the representatives verbal assurance that all the attempts would be made from her side to fulfill those demands. However, no positive moves were visible from the side of the minister even after 4 months. The strike started with boycotting all non-emergency services and it went like that for a few days.

Are the demands of KMPGA genuine?

The first demand was to appoint NAJRs to increase the manpower in the medical colleges. If manpower increases, it will benefit doctors as well as patients. The patient’s waiting time will decrease and will get better care, and the doctors will face less work pressure.

The second demand was to reinstate the 4% annual stipend hike. In 2019, after a token protest by KMPGA, Mrs. K K Shailaja (then health minister) agreed to this hike annually. Nevertheless, the finance department withheld this yearly increase in stipend citing the COVID pandemic as a reason. However, it must be kept in mind that various other states have given salary increments to doctors as a token of recognition and appreciation for the selfless work done by the doctors. Moreover, the stipend of junior doctors is inadequate considering their duty hours. If someone deserves an increase in salary in this period, it is the junior doctors who risked their lives to save the patients.

How did the Kerala Government react to these demands?

Neither the health minister nor the Directorate of Medical Education (DME) acknowledged the demands of the resident doctors and tried to downplay the situation by pointing their finger towards the central government. Consequently, KMPGA gave notification that the strike would be escalated by boycotting the emergency services as well and that move did bring a positive change. The Health minister met a few representatives of the KMPGA and gave verbal assurances that NAJRs would be appointed soon. She, however, ducked the 4% stipend hike demand by informing them that the matter is still under the consideration of the finance department. As she didn’t keep her promises given during the previous meeting conducted 4 months back, KMPGA wasn’t convinced by her verbal assurances this time and moved forward with the protest which included a boycott of emergency services as well excluding COVID care.

In this critical situation, when junior doctors were fighting for genuine causes, a mature administrator would have negotiated with them again to solve their grievances. Contrary to that, Health Minster ordered the Principals of all GMCs to expel all the junior doctors from hostels who were participating in the strike. The administration of each medical college asked the resident doctors to vacate the hostel immediately without even considering that there were pregnant ladies and lactating mothers among them. This immature and senseless action led to widespread outrage against the minister and the next day, she took a U-turn and said no such directives were given by her office.

A day later, a notification for the recruitment of 373 NAJR posts was released by Govt. of Kerala. This move appeared as an eyewash as the total deficiency of PG doctors in the state is around 1,000. Moreover, the government hasn’t mentioned any timeline of the recruitment process also in this order.

Our health minister, Mrs. Veena George, conveniently forgot that our health system could contain deadly diseases like Nipah and COVID without a catastrophe because of these young resident doctors along with other health care staff. The so-called “Kerala Health Model” was built on the blood and sweat of these youngsters. Our health minister was more interested in gimmicks like late-night emergency department visits at medical colleges to get better media coverage.

Take-away for the common man

This strike, if it turns out to be successful, will eventually benefit the common man. More doctors mean more people to look after the patients and that will improve the care that the patients receive. The lag for surgeries will decrease, the waiting period for consultations will improve, more doctors will be available for intensive care, and that list of benefits goes on. Doctors will get more time to rest which will improve their clinical decision making which will again benefit the patients. You don’t want to get operated on by a doctor who hasn’t slept for 3 days, right?

Feudalism, once a prevalent system in our society that was undemocratic, ended long back even before we were born. Despite that, the vestiges of that system are still hanging on in our medical system pushing the health care professionals to work as slaves. This fight is against that slavery in disguise and the public should stand with the doctors.

3 thoughts on “Kerala resident doctors’ strike: a must win movement for the doctors and patients”