Must know topics in Pathology for MBBS students 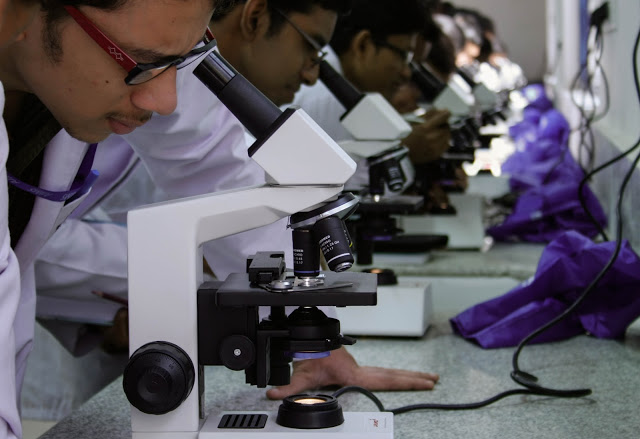 Pathology, Pharmacology, and Physiology; these three subjects are called the three pillars of medicine. During my second year in medical college, one of my seniors told me that, a good doctor is that person who knows these three subjects well. Even though my opinion differs a bit, it is a fact that these three non-clinical subjects are important as far as making a good diagnosis is concerned. This article is supposed to give a detailed description of the important topics in pathology. For other subjects, please read my article on My Second Year MBBS Experience.

Yes, Pathology can be really difficult for the undergraduates despite having simple concepts. It’s because of the amount of facts that a student has to mug up to construct a good answer on the answer sheet. Examiners are infamous for setting questions from that disease which a doctor will never see in his life. The diseases that a doctor sees every day in his clinic have no place in the question papers. Gene mutations and microscopic features make the examiner happy, not the clinical features.  This will create an impression in the students that these are the diseases that they encounter at the clinic and what they actually deals with will be another set of diseases.

Robbins text book of Pathology, the standard textbook in pathology for undergraduates consists of 10 general pathology and 19 systemic pathology chapters. It will take too days, if an undergraduate wants to read all the 470 pages of general pathology from which not more than 6 questions will be asked. The student would have studied 90% of the portion, but the questions could still come from the rest 10%. So on the day before the exam the student will be in dilemma to whether read Robbins or to switch to some preparatory manual books. Preparatory manuals have given everything in point wise therefore it is easy to remember. I would still not recommend that because it’s not error proof.  So here I enumerate those topics from which I used to get questions for the exams in my college. These are all must know topics. If you study these topics and relevant diagrams from Robbins, good marks are assured.

Hypertrophy, hyperplasia, atrophy and metaplasia can come as short answer questions. The difference between any two is also a must know question. So is apoptosis and necrosis. Morphological types of necrosis and pathways of apoptosis will make a five marks question. Apoptosis is as such is a long question. Difference between apoptosis and necrosis and dystrophic and metastatic calcifications are the favorite questions of examiners. Free radical in injury, reperfusion injury and endogenous pigments (lipofuscin, melanin, hemosiderin) are infrequent questions, but can be asked.

Repair and regeneration was a special topic because despite of the massive size, only 2 questions used to come from that chapter. When granulation tissue is asked, make a histological diagram also. Difference between healing by primary and secondary intensions is important not only in pathology but also in surgery. Edema, Shock (septic), DIC and Embolism are long questions. Must know topics from this chapter also include “differentiate between” questions which are white and red infarct, arterial and venous thrombi, ante mortem and post-mortem clot.

Lysosomal storage disorders, Turners syndrome, Klienfilters syndrome, Down syndrome and genomic imprinting are important short notes. SLE, RA, Sjorgren syndrome, tolerance and transplant rejection can come as short notes. SLE used to consume my valuable working hours by virtue of its massive size. All types of hypersensitivities are important. The “differentiate between” question is Central and peripheral tolerance.

You should be well versed with all the terminologies like polyp, choristoma, hamartoma etc. Laboratory diagnoses of cancer and paraneoplastic syndromes were my professional exam long question. Chemical mediators, oncoviruses, tumor antigen and tumor markers are short notes. Invasion and metastatic cascade can decide whether you can proceed to next year or not. Differentiate between questions include benign and malignant neoplasm & initiators and promoters.p53 and RB are rare questions.My head of department of Pathology was an oncologist and she was crazy about these questions.

Don’t sit in the examination hall without reading Leprosy and Tuberculosis. Differentiate between Tuberculoid and Lepromatous leprosy consumed my 3 marks in my professional exam. Since you are an Indian and Tuberculosis is common in India, you are expected to know tuberculosis well and it can be asked in pathology, microbiology, medicine, pediatrics and gynecology (practically anywhere). My faculty in Internal Medicine once told, Tuberculosis can cause anything except pregnancy. Vitamin A and D deficiencies are important (Professors don’t like B and C). Neuroblastoma, Cystic fibrosis and Wilms tumor can make your life difficult.

Blood Vessels
If I were the examiner, then I would surely put pathogenesis of atherosclerosis and it’s morphology as a long answer question. Promise yourself that you would leave no stones unturned while reading atherosclerosis. Risk factors of atherosclerosis should be in your fingertips. Debakey classification of dissection and difference between aneurysm and dissection can appear as short answers.c-ANCA and p-ANCA related vasculitis usually comes as MCQs. Giant cell arteritis, Takayasu arteritis and Kaposi sarcoma are possible short answers. Hemangioma is a question of practical exam.

Myocardial infarction is the most important question of heart. Time of onset of key events, laboratory markers of myocardial injury and morphological changes (gross, light microscopic and electron microscopic) can spit venom at you (if you know what I mean). Cardiomyopathy, its different types and the differences between them make a five mark question.

Diseases of WBCs and Lymph nodes

Learn causes for neutrophilia, neutropenia, eosinophilia, eosinopenia, basophilia, basopenia etc. because it is one of the most common viva questions. The important neoplasms for undergraduates are AML, CML, ALL, ALL, Burkitt lymphoma, Hodgkin’s lymphoma and Multiple Myeloma. Don’t dig too deep into its mutations. Understand and practice its morphology diagrams. BCR-ABL fusion gene diagram is very important so is WHO classification of AML. Differences between myeloblast & lymphoblast and Hodgkin’s and Non-Hodgkin’s lymphoma are the chief short questions. Learn everything possible about Hodgkin’s lymphoma with special emphasis on Reed-Sternberg cells.

Definition, classification and types of anemia are the most significant question of this chapter. Iron deficiency anemia assumes special importance because it is very much prevalent in India. Learn in detail Sickle cell anemia, Thalassemia, Megaloblastic anemia, Folate trap, Paroxysmal Nocturnal Hemoglobinuria, Hemophilia and Disseminated Intravascular Coagulation are the possible questions from this chapter. Bleeding disorders are a store house of MCQs. A good idea about investigations pertaining to anemias is good to have.

ARDS is a good to know topic. Definition, classification and differences between different types of emphysema are a long answer question. Asthma and its diagrams can make your life not lesser than worse. Sarcoidosis, pneumonia (etiology and morphological types i.e. bronchopneumonia and lobar pneumonia), pneumoconiosis and carcinoma of lung are of paramount importance. Sometimes crazy examiners do ask the difference between tuberculosis & sarcoidosis and obstructive & restrictive lung diseases.

Barret Esophagus is an example of metaplasia as well as a possible short answer from this chapter. The pathogenesis, morphology and diagram of gastric injury and ulcer formation can come as a long answer question. Cushing and Curling ulcers will confuse you as far as MCQs are concerned. H. pylori gastritis itself and its difference between autoimmune gastritis are not infrequent questions. For me, Hypertrophic Gastropathies appeared as rat traps with baits because these pathologies will confuse a lot in MCQs.  Gastric Adenocarcinoma as such is not asked as a theory question but the morphology of the same is frequently asked especially Linitis plastica. Celiac disease is an ‘easy to score’ question. Classification of polyps and Inflammatory Bowel Diseases (both Crohn’s disease and Ulcerative Colitis) were the two most commonly encountered questions from this chapter.

Pathogenesis of Cirrhosis and portal hypertension comes under ‘must know’ list of topics. Among the viral hepatitis, Hepatitis B & C are more important for an under graduate student. The sequence of serological markers in both infections itself is a short answer question. A characteristic feature of Hepatitis E infection is the high mortality rate among pregnant women. Morphologic features of acute and chronic hepatitis caused me head ache many times. Questions on alcoholic liver disease and its morphology are as common as the number of alcoholics in India. I never studied Wilson disease because I got a good idea about the pathogenesis from one of the episode of the House MD series. NAFLD, Hemochromatosis and alpha-1-antitrypsin deficiency are not infrequent but learn these topics only after you complete hepatitis and cirrhosis.

I was asked to write about the mechanisms of Glomerular injury in my pre-final exams. I never expected question, but MBBS is all about surprises. There is a nice table given in Robbins. Difference between nephritic and nephrotic syndromes is a cliché question. I think the examiner’s bowel habits will get deranged if he/she doesn’t ask that question. Learn these tow topics thoroughly so that you can answer even at the mid night. Causes of nephrotic syndrome have been described in a table in Robbins which is good to know. In this era on non-communicable disease, don’t go to exam hall without reading diabetic nephropathy. Learn some differentiating features of Ischemic type acute kidney injury from toxic type. Autosomal dominant polycystic kidney disease and autosomal recessive polycystic kidney disease are two important short notes. Find out the differences between these two entities. Urolithiasis is an important topic for practical exam. You may be asked about the shapes of various urine crystals. Renal cell carcinoma and Wilm’s tumour are the must know neoplasms in this chapter.

Male Genital System
Most of the questions asked from this chapter are related to the neoplasms. So give special attention to classification of testicular tumors, seminoma and differentiating features of seminomatous tumors from non-seminomatous tumors. Seminoma is important viva question because Yuvraj Singh suffered from the same (extragonadal seminoma located in mediastinum). Benign prostatic hyperplasia is a very common condition in older males and a very common question as far as pathology is concerned. Learn the pathogenesis of BPH as well as prostate cancer.

Cervical cancer is a lethal but preventable cancer. Likewise a question on cervical cancer will be lethal if you don’t know the answer because most of time if not all, it will be a long answer question. Learn all the risk factors, HPV types, staging, pathogenesis, screening and vaccination. Don’t leave any pages unturned. Endometriosis, endometrial hyperplasia, leiomyoma and adenomyosis are short answer questions. Read the table given in Robbins to understand the differences between type I and type II endometrial carcinoma. Classification of ovarian tumors is an important short note.  Read thoroughly hydatidiform mole as well.

I enlisted these topics so that you can stick on to Robbins itself for exam preparation. Even though it’s bulky, it is a good textbook and you will find it easy to comprehend. Pictures speak a thousand words, so make it a habit to draw diagrams for all questions.

Related article: My Final Year MBBS Experience
Please give your valuable feedback as comments in the comments section.